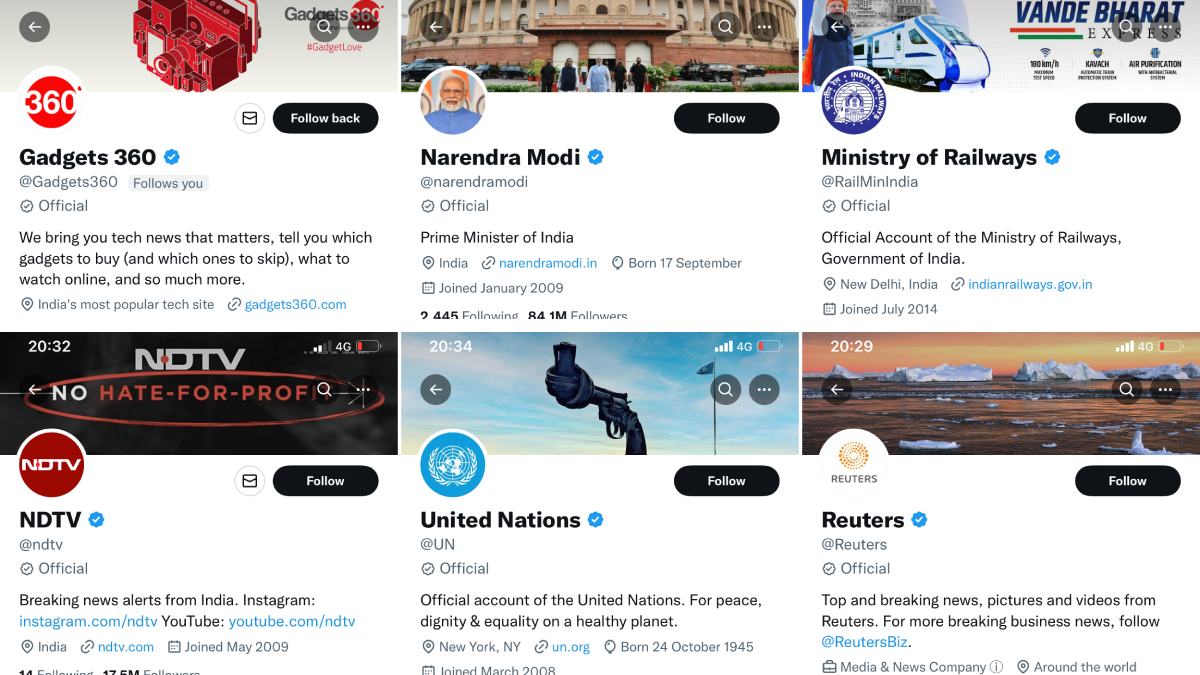 Twitter has started displaying a new tick badge with the word ‘Official’ on the recognised Twitter accounts of news sources and public figures in India. Gadgets 360 has received its own tick, as has Prime Minister Narendra Modi. The previous “blue tick” badge, indicating that an account has been verified, are also still shown, for now. Twitter recently caused a storm for changing the way its widely recognised blue ticks work – instead of signifying that an account has been verified by Twitter as belonging to a noteworthy institution or individual, they are now given to all people who subscribe to Twitter Blue, the company’s paid offering.

Update: The check marks have disappeared from all accounts, with Elon Musk saying “I just killed it” in response to a tweet from tech YouTuber Marques Brownlee, who had just received an ‘Official’ mark of his own. It is not immediately clear whether the rollout was premature, or yet another change will be implemented in response to user confusion. The original story follows:

One of the first sweeping changes announced by Twitter’s new CEO Elon Musk was the repurposing of the blue tick and raising the price of Twitter Blue to $8 (approximately Rs. 650) per month, after initially suggesting that the privilege should cost $20 (approximately Rs. 1,630). Musk has also indicated that he wants to expand Twitter Blue to multiple countries including India before the end of November, and that prices will be adjusted in keeping with purchasing power parity.

Twitter Blue subscribers will also be promoted higher in search results, reply threads and trending topic lists. This will result in the amplification of paid voices, which Musk is hoping will drive adoption of the premium subscription service. However, critics quickly noted that this defeats the purpose of verification, allowing anyone who pays for Twitter Blue to appear to be a verified account. This also led to a spate of deliberate attempts to impersonate celebrities including Musk, who soon clarified that parody accounts need to be marked as such explicitly in their names, or risk permanent suspension from the platform.

Twitter’s solution to this appears to be the introduction of a second checkmark with the word ‘Official’, which has now begun appearing below the account’s handle and name on profile pages and in search results. It is not yet clear how Twitter will decide which accounts qualify for this badge, and whether everyone who was previously eligible for verification will be able to get one.

Ever since Musks acquisition of Twitter went through, he has been making news. He first fired the previous CEO and dissolved the entire board of directors, Most recently, Musk has made moves to curb expenses, including a massive round of layoffs, in which an estimated 50 percent of all employees including entire teams and a significant portion of Twitter’s Indian workforce were forced to exit the company, leaving work unfinished and teams understaffed.

Jamshed Avari has been working in tech journalism as a writer, editor and reviewer for over 16 years. He has reviewed hundreds of products ranging from smartphones and tablets to PC components and accessories, and has also written guides, feature articles, news, editorials, and analyses. Going beyond simple ratings and specifications, he digs deep into how emerging products and services affect actual users, and what marks they leave on our cultural landscape. He’s happiest when something new …More

How To Use WhatsApp Call Link